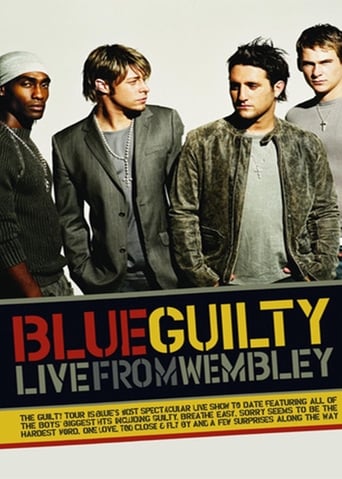 Blue: Guilty Live From Wembley is a film released on 2004 and directed by with the duration of 130 minutes in languages English with a budget of and with an IMDB score of 0.0 and with the actors Simon Webbe Lee Ryan Duncan James . Late 2003 the boys embarked on another mammoth arena tour of the UK, taking in Sheffield, Cardiff, Birmingham, Newcastle, Glasgow, Manchester and London's Wembley Arena. The Guilty Tour is Blue's most spectacular live show to date featuring all of the boys biggest hits and a few surprises along the way. Filmed at Wembley Arena in front of 12,000 fans, Antony, Duncan, Simon, Lee and their live band take you through such show-stopping highlights as "One Love", "All Rise" and "Too Close". The set list also features songs from their double platinum third No 1 album, "Guilty" including the hits "Breathe Easy", "Signed, Sealed, Delivered I'm Yours" and title track "Guilty" not to mention a memorable Michael Jackson medley that has to be seen to be believed.