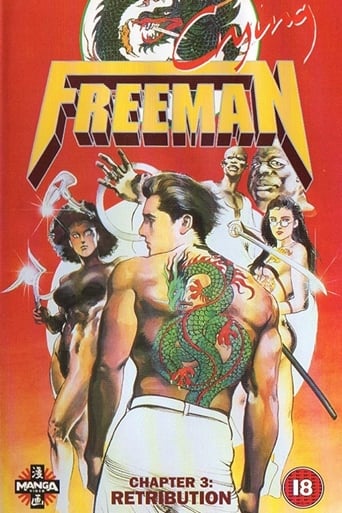 Crying Freeman 3: Shades of Death, Part 2 is a film released on 1990 and directed by Johei Matsuura, with the duration of 55 minutes in languages 日本語 with a budget of and with an IMDB score of 7.0 and with the actors Hirohiko Kakegawa Toshio Furukawa Daisuke Gouri . Ron Tayan now leads the 108 Dragons; Fu Ching Ran is his loyal wife. As their body tattoos show, he's the dragon, she's the tiger. The 108 Dragons are attacked by African Tusk, a syndicate intent on world control. Ron goes to Africa, dealing first with Shicaro, African Tusk's assassin, then with Jagone, its leader. Despite his success, he must still face Bugnug, Jagone's muscular and athletic military commander: Ron gives her a new name, Dark Eyes. Back in Hong Kong, Fu faces danger as well. A Muramasa sword with a dark history and, seemingly, its own demon spirit, falls into her hands. She seeks to tame it, and in the process, discovers her inner warrior identity