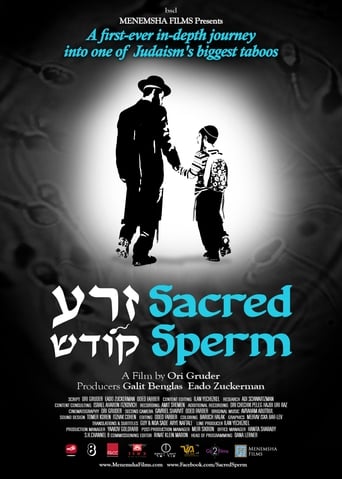 Sacred Sperm is a film released on 2014 and directed by Ori Gruder, with the duration of 59 minutes in languages עִבְרִית with a budget of and with an IMDB score of 0.0 and with the actors . The film creates a daring first exposure on the way parents, rabbis, teachers, pedagogues and therapists within the Orthodox Hasidic Jewish Community educating their male children from infancy to adolescence, to avoid spilling their sperm. They target them to keep their seed only after marriage with a female for the purpose of fertilization. "Sacred Sperm" penetrates into one of the most suppressed hidden issues in the Orthodox Hasidic Jewish Community - a Taboo. Throughout the film we follow the emotional and theological struggle of the director who is trying to find a proper way as a father to explain his teenager son logically why he should keep this major Mitzvah (commandment) which perceived by many as unreasonable and seems impossible to fulfill.