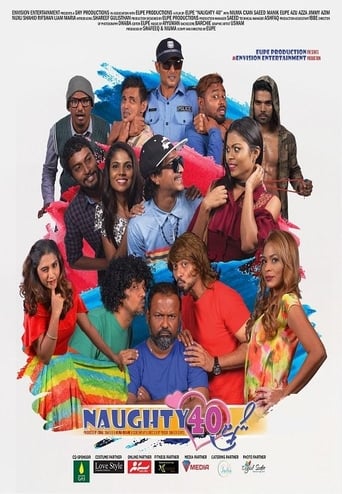 Naughty40 is a film released on 2017 and directed by Yoosuf Shafeeu, with the duration of 204 minutes in languages with a budget of $32,425 and with an IMDB score of 0.0 and with the actors Niuma Mohamed Yoosuf Shafeeu Fathimath Azeesha . This is a story of three friends, Ashwanee, Ahsan and Ajwad who are in their 40s and are single. Ashwanee couldn't get married as his girlfriend ran away. Ajwad is divorced and looking after his son, Jawad. Ahsan lost his wife after giving birth to a boy. Nineteen years later, a stranger comes to meet Ashwanee regarding handing over a girl named Ashwa. It was the last wish of her mother, Ziyana. And when Ashwanee sees Ashwa, he is shocked as Ashwa exactly looks like her mother. Ajwad's son, Jawad calls him and asks him to come to the island where he runs his business. Ajwad decides to take along his two friends and their kids. After going to the island, Ajwad, Ahsan and Ashwanee decide to enjoy their 40s with younger girls from the island and have a good time. However, in the island, Ajwad's business competitor, Guli schemes to destroy his business with the help of Zahid, the chief police officer of the island and her younger sister Taniya.