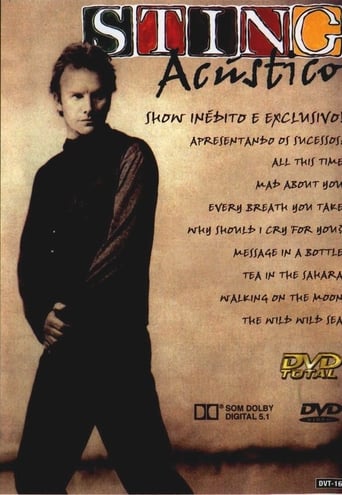 Sting: MTV Unplugged is a film released on 1991 and directed by with the duration of 44 minutes in languages English with a budget of and with an IMDB score of 9.0 and with the actors Sting . This video is the MTV Unplugged performance which was recorded in New York on 5 March 1991. The difference between the version screened on MTV and this release however, is the inclusion of an additional song and interview. Whereas the MTV show concentrated on pre-'Soul Cages' songs, on this release you get excellent performances of 'Why Should I Cry For You' and 'The Wild Wild Sea'. As proved to be the case with the VH1 Storytellers show, Sting enjoyed himself so much doing the acoustic set, that the following month he did a similar set in his home town of Newcastle at the tiny Buddle Arts Centre. The Unplugged video is very interesting though and the songs performed work extremely well in their stripped down versions. Set List: 1. All This Time; 2. Mad About You; 3. Every Breath You Take; 4. Why Should I Cry For You?; 5. Message In A Bottle; 6. Tea In The Sahara; 7. Walking On The Moon; 8. The Wild Wild Sea