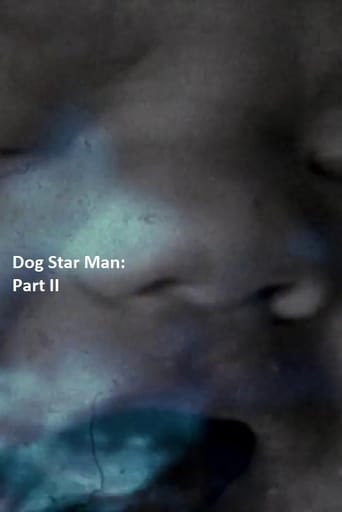 Dog Star Man: Part II is a film released on 1964 and directed by Stan Brakhage, with the duration of 7 minutes in languages No Language with a budget of and with an IMDB score of 6.9 and with the actors Stan Brakhage . A man, accompanied by a dog, struggles through snow on a mountain side. We see film stock blister; drawn square shapes appear. Then, we see an infant's face. The images of struggling climber, baby, blurred film stock, large snow flakes, and what may be microscopic details of matter are superimposed on each other, one dominating the frame briefly to be replaced by another. As the man falls in the snow and tries to regain his feet, the baby continues to appear, first with eyes closed. Alternately, images rush by - montages of paper cutouts and life under a microscope.