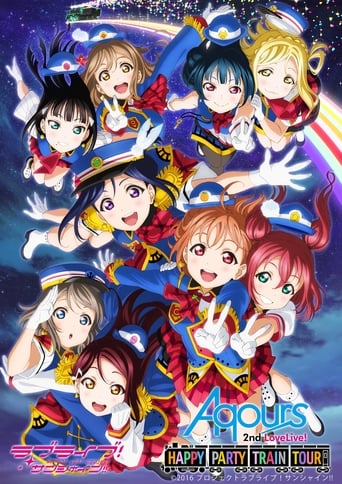 Aqours 2nd LoveLive! ~Happy Party Train~ is a film released on 2021 and directed by with the duration of 300 minutes in languages en with a budget of and with an IMDB score of 0.0 and with the actors . Aqours 2nd Love Live! HAPPY PARTY TRAIN TOUR is a DVD/Blu-Ray disc of Aqours's live concert that took place in the following locations: -Nippon Gaishi Hall in Nagoya on August 5 & 6, 2017 -World Memorial Hall in Kobe on August 19 & 20, 2017 - MetLife Dome (previously known as Seibu Prince Dome) in Saitama on September 29 and 30, 2017 Day 1 of the Nagoya & Kobe legs were live-streamed in cinemas across Japan, Korea, Taiwan & Hong Kong. Both days of the Saitama leg were live-streamed in cinemas across Japan, as well as Korea, Taiwan and Hong Kong. Day 2 of the Saitama leg was live-streamed in Singapore. China had a delayed screening of both days of the Saitama leg, while America, Australia, New Zealand, Thailand, Canada, Malaysia, Philippines, Indonesia and Singapore had delayed viewings of only Day 2. The concert Blu-Ray/DVD was released on April 25, 2018.