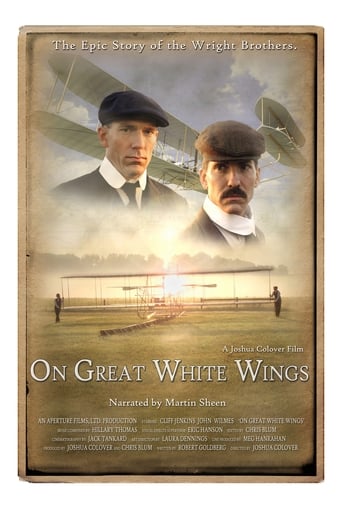 On Great White Wings the Wright Brothers and the Race for Flights is a film released on 2021 and directed by with the duration of 37 minutes in languages en with a budget of and with an IMDB score of 10.0 and with the actors Martin Sheen . The Wings the Wright Brothers Built! On Great White Wings is the amazing story of the Wright brothers and their quest to fly. It is also the theater presentation at Dayton Aviation Heritage National Historical Park in Dayton, Ohio where the Wright brothers built, tested and flew what would become the world’s first practical airplane. Self-taught scientists and engineers, Wilbur and Orville taught the world how to fly and are one of America’s greatest success stories. Produced by Aperture Films, Ltd. for the National Park Service. The Sky is No Longer the Limit For over four years, the Wright brother’s struggled with the race for flight. Beginning with just wood and fabric gliders at Kitty Hawk and transforming into the fully functional 1905 Wright Flyer III in Dayton, this inspiring film documents the Wright Brother’s path to make their dream of human flight a reality.