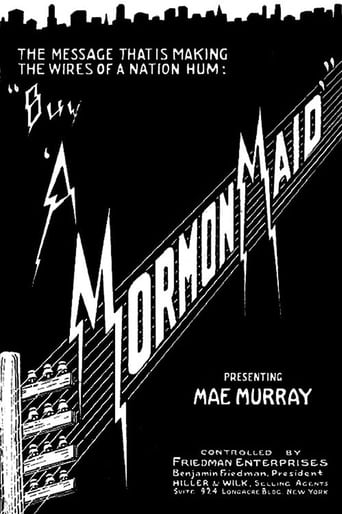 A Mormon Maid is a film released on 1917 and directed by Robert Z. Leonard, with the duration of 68 minutes in languages English with a budget of and with an IMDB score of 5.0 and with the actors Hobart Bosworth Mae Murray Frank Borzage . This silent melodrama is set against the 1840s westward migration of the Mormons. Dora, a young woman, and her family are saved from an Indian attack by a Mormon community traveling to Utah. They join the wagon train. Dora is pursued by two men, one a recent convert, the other a scheming elder with a stable of wives. The Mormon elder wants her in his harem. When the mother kills herself from revulsion toward polygamy, the daughter must consider her own future and the man she loves. One of Mae Murray's few surviving films, this was intended by Robert Leonard to be a thoughtful drama about the goods and evils of Mormonism, but today it is generally considered pure anti-Mormon propaganda.